The image of the police dog is very negative

Training dogs for bite work is something that is done by thousands of people worldwide. For sports like IGP/IPO and KNPV but also for military and police forces who use the qualities of suitable dogs. This is always done in the interest of society.

Unfortunately, training and working with bite dogs has been very negative in the news in recent years. Various television programs in The Netherlands have shown images of dogs being used or trained in a wrong and not animal friendly way. Dogs were kicked or beaten during training and during deployment it was shown that the dogs did not listen to their handlers and for example did not let go when biting a person.

These television images speak for themselves and it may be clear that we certainly do not agree with the way these dogs are trained and used. This can and must change! Yet it is also true that these images were only one-sidedly and incompletely exposed in the media. Only bad examples were shown, which created a huge wrong image about the police dogs in The Netherlands.

Police dogs in our country do a great job and prevent a lot of violence. Annually, these dogs are used many times with policy. The dogs are not just used but often as one of the last means against serious criminals or people who cannot be controlled in any other way. We find it very unfortunate that the media has not paid any attention to the added value of these dogs. 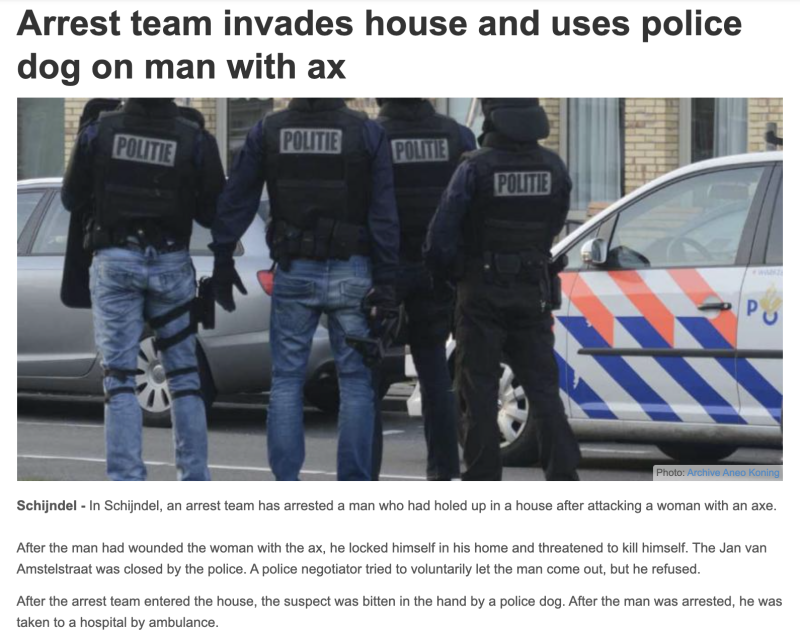 Dogs learn faster if they are positively trained

Training dogs for bite work is something the dogs themselves love and enjoy doing. For decades, working dogs have been bred that naturally possess the drives and qualities to do this work. By using new insights and training methods it is possible to train these dogs in a positive way and to keep them under control. Without having to heavily correct the dogs. This does not mean that these strong dogs can be trained without any form of correction. But by building up the training correctly it can be done in a much more animal friendly way. Without having to hit and kick the dog or without the use of power belts. The prevention of incorrect conditioning also plays an important role in this. I will elaborate on this further in this blog.

That training dogs can and must be different has been clear for some time. In our country, therefore, there are already many courses to transfer the new insights and training methods to people who have trained in the "old fashioned way" for years. That this is not always easy will be clear. If someone is used to a certain way of training and has had success with it, it is not always easy to change. It is also often said by these people that positive training takes much longer and is therefore seen as a disadvantage. But that is absolutely not the case. By training positively a dog learns much faster what the intention is and he is open to learn. Fortunately, there are now more and more people who make use of the new insights in training their dogs for bite work. Often these people are surprised that it can be done this way. This is obviously a good and positive development.

In recent years we have raised and trained many dogs, often for bite work. This led to social dogs that, for example, in addition to biting work, also simply track between people in the village. Without showing any form of aggression towards those people. Dogs in balance, who know what the intention is. Who are fresh in the head and have learned what to do and what not to do.

We regularly receive results from dogs trained by us that are now working as K9's in the U.S.. Criminals who have been arrested by the deployment of our dogs. But we also get pictures of the same dogs doing a demonstration at a school between school children. 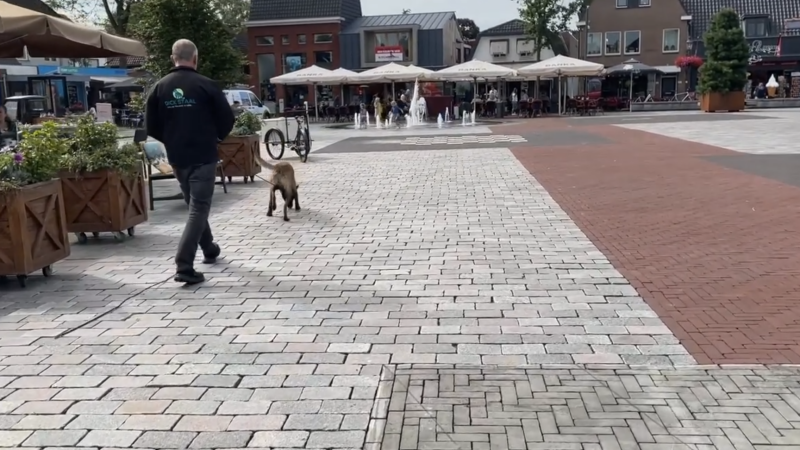 Gustav is also trained for bite work, but here he is tracking between people in a public place, with children playing in the fountain in the background.

We often get asked what exactly are these new insights and methodologies when training a dog for bite work. It would be going too far to explain all aspects of the structure of our training here but I will mention some examples where in general there is still much to gain.

What often goes wrong is conditioning a dog in the wrong way when building up the training of bite work. A young dog is often teased structurally for a long time by a decoy while "stop police" is called and the dog hears shots. This causes "stop police" and shooting to become the sign for the dog that it may hang in the leash and also become very agitated during its attempts to bite the decoy. If later on the same dog has to learn to lie down in the same situation, this always causes big problems, because before he was allowed to pull hard and bark. The dog then often has to be severely corrected to achieve that goal. It is better to avoid this false conditioning.

Don't we tease our dogs then? Certainly we do, but only after we have first given the dog the command to bite and not before. This is important difference that will prevent wrong conditioning altogether.

This is Jane, we are teaching her at a young age to let go on command.
This will help us avoid problems in the future.

The dog learns from his own behavior

Another example is walking together with the dog to the start of a training session. Often we see dogs that are constantly being corrected because they are very excited. They want to run ahead or already start. This correcting can be completely avoided by applying a negative punishment. If the dog pulls or runs too far ahead, the boss consistently turns around immediately. The dog is not allowed to bite and something is taken away. By paying much attention to this, especially in the beginning of the bite training, the dog does not need to be corrected later on. The dog has learned from his own behavior. He knows what he has to do and not to do in order to eventually be allowed to bite.

These are just a few examples of how to train bite dogs in a more animal-friendly way. When we train our dogs for bite work we often do it in public, just along the road. We train positively and have nothing to hide. Anyone can stop and come and watch. Something that often happens in our beautiful city Nunspeet with all its tourists. Of course sometimes something goes wrong because our dogs also make mistakes. But by a correct application of the latest insights and a good structure of the training, the correction can take place in a much more animal friendly way. This makes working with these dogs fun for both people and dogs.

To give you a good idea of the way we train, we have added the video below. Here you can see Gustav being trained for bite work in the KNPV program.

About the author
Dick Staal
My name is Dick Staal. Together with my son Sander I work daily with great passion and pleasure in our family business Dog Training Dick Staal.Sander's work is mainly focused on marketing, administration, customer contact and organizing seminars. This allows me to fully focus on my passion and that is training dogs, guiding people in their dog training and giving seminars.Since 1977 I have been training dogs on a daily basis. With over 40 years of experience I have developed a system in which we train our dogs positively with extremely fast results. I enjoy sharing this knowledge with other dog trainers and to see that they also achieve rapid success with our way of training.With my blogs I share this knowledge and I want to make everyone enthusiastic about our system. I hope you enjoy reading my blogs and that you can gain many valuable tips from them!
Website
Others also read these