Learning from a dog

"If something is taught positively, does the dog always listen?"

There are numerous studies that show that it is better to raise and train dogs in a positive way than by using negative stimuli, for example. This is because by training positively, dogs are open to learning and are not afraid to make mistakes. As a result, the learning capacity increases. Positive training mainly means using the learning principles of positive reinforcement (with food) and negative punishment (time-out).

If exercises are taught by means of negative stimuli, this indeed has disadvantages for the dog. The dog becomes quickly stressed because there is corrected. Especially because the dog does not yet understand what the intention is and is afraid to make mistakes.

The learning ability of the dog is of course much less because of this. This learning is mainly based on the learning principles of positive punishment (a correction) and negative reinforcement (pulling the line tightly downwards so that the dog has to lie down). It is possible that an exercise that is learned in a negative way is performed well by the dog later on. But when it becomes difficult again, the dog will often become stressed immediately. This is due to the negative experiences in learning the exercise. Over the years, I have often seen a dog that was taught an exercise with force, later become stressed at a time when it became difficult. The dog was then much less able to solve problems, unlike dogs trained in a positive manner. 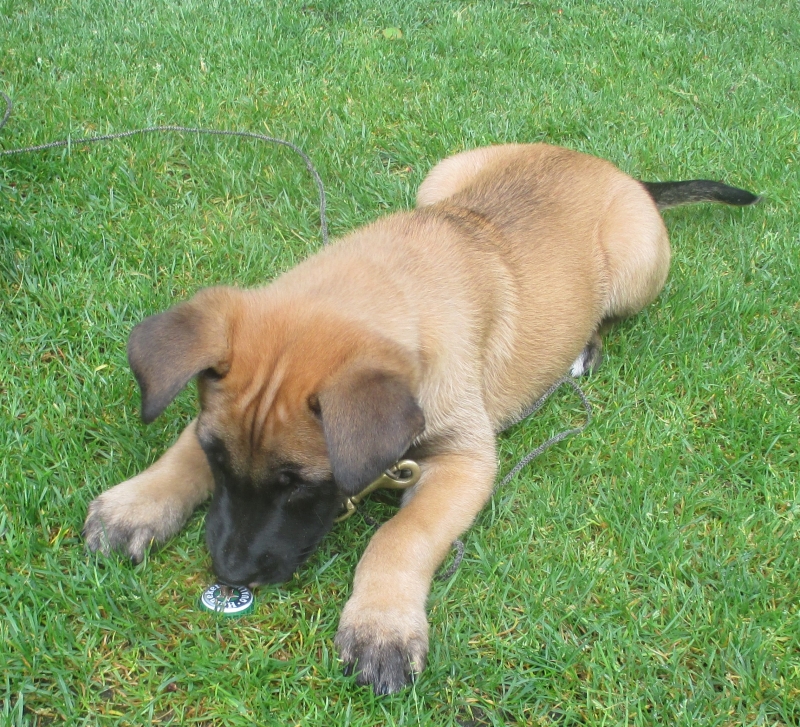 This young dog has been positively trained and therefore able to indicate a small object with human scent at a very young age.

From science and by numerous behavioral therapists is therefore indicated that it is better to raise and train dogs exclusively positive. And that this is also possible without having to correct the dog. This is true when it comes to teaching all kinds of exercises. During the training of my dogs I apply the previously mentioned positive learning principles. This allows the dog to learn the fastest.

But if something is taught positively, will a dog always listen? If there is sufficient motivation in the dog, yes. This differs per dog of course but also the boss plays an important role. To what extent he can keep a dog focused in a positive way. But due to circumstances the motivation for a dog can just disappear or change. For example if there are distractions that are more interesting for the dog than the original motivation for the dog. Such as a bitch in heat, food scraps on the street, horse poop, rabbits and so on. Examples of this can be seen daily on the street; Dogs that have learned to neatly follow the boss in exchange for a treat. Or to sit nicely before crossing the street. But they don't listen anymore when another dog suddenly arrives. Or if there are other circumstances that cause distraction or excitement. The motivation - usually the treat - is then insufficient to make the dog listen. To solve a problem like this, a higher form of reward can be sought. To motivate the dog to also listen at a certain distraction. If this succeeds, the problem is solved and the dog will be motivated to listen to his boss again.

If it does not succeed in solving a problem in this way, then there are some options:

Another option is to teach the dog that he must also listen to his boss. Especially with working dogs, this is important. A tracking dog that is tracking in the village will need to listen to his boss if necessary to avoid dangerous situations. The same goes for the dog that has to retrieve keys dropped by a decoy. The keys are of course much less attractive to the dog than the decoy himself.  Initially, then, a certain amount of coercion will always be necessary to teach the retrieving in the presence of a decoy. By first learning this exercise without a decoy, everything is of course easier for the dog. In any case he understands very well what the boss wants from him. 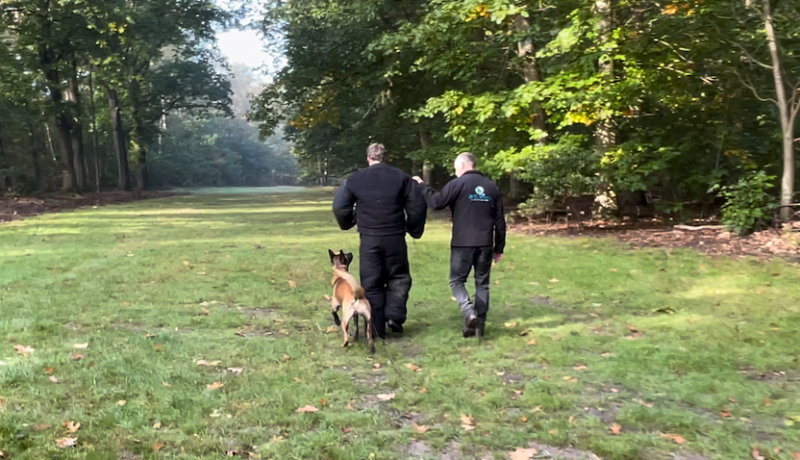 Here you see the KNPV exercise transport, where the dog has to retrieve keys that the decoy drops from his hands at a certain point.

When it comes to undesirable behavior, in theory it is also possible to regulate in a positive way that this behavior is not performed (anymore). In general, it is advised to also link to undesirable behavior something that is more important than the behavior in question itself. An example: Almost all dogs like to eat horse poop and will try to eat it if given the chance. By distracting and rewarding the dog, it can be achieved that the dog in such a situation turns to his boss to be rewarded. The same if a dog is taught that seeing or smelling a rabbit will get him something nice from the boss. Then, too, he will turn to his boss to be rewarded. There are many more examples to give to achieve in this way that the dog will no longer perform certain unwanted behavior. It must be realized that these dogs have not learned that it is not allowed to perform the behavior in question.

But what about the working dog that has to work in all kinds of situations where they are constantly confronted with all kinds of temptations? It will be clear that in that case it is highly undesirable and unacceptable that this dog is constantly focusing on the boss to receive a reward. A dog that is searching or tracking and smells food scraps and then runs directly to its owner to be rewarded is something that is not desirable for a tracking dog. The same goes for a detection work dog that is searching a house and smells something good in a closet. This dog also just needs to keep working. For this reason it is necessary, especially with the working dog, to unlearn certain undesirable behaviors.

This is still a young dog that is being trained to be a working dog. The dog is already well socialized and therefore will not be distracted by the passing public during tracking.

When learning from the dog, we therefore make a distinction between learning and unlearning. Learning has already been discussed earlier in this article. Everything is positive when it comes to learning exercises. But when it comes to unwanted behavior, it's different. Then it is especially important to be clear as early as possible and to prevent unwanted behavior from developing. Our last puppy Jane was also very interested in horse poop. For the first few weeks we avoided this problem as much as possible and taught her the meaning of "Good boy" and "No" during that period. After those first weeks, we quietly sought out problems and corrected unwanted behavior with the voice and, if necessary, a light leash correction. This taught her that eating horse poop is not an option and by now this has disappeared from her world, so to speak. Just like biting the leash, the pants of the boss, picking up everything from the street and so on.

Often people think it is pathetic to correct a dog so badly. But this is not a problem. Dogs do this also among themselves. First the dog growls to the other dog (we say "no"), then they show the teeth (we a finger) and possibly bite (corrections with the line or hand), these are aspects that are normal for a dog. And if in an early stage of life the dog is made clear what undesirable behavior is, there is hardly any need to correct later. Dogs often correct each other very harshly but we do not have to do that. We can achieve our goal by being clear and, if necessary, by building up corrections calmly until the dog stops the undesired behavior.

Ultimately, correcting with policy promotes the dog's well-being. The dog is no longer engaged in unwanted behavior and can run loose in the woods where there is horse poop and rabbits running around. Our dogs can also run around in the garden without paying attention to our chickens which are also running around freely. And when a dog is no longer occupied with all kinds of undesired behavior, he will focus on what is rewarded by his boss.

Over the years it has become very clear to me what the best way is to raise and train dogs. Using our "combination method". Always teach exercises positively but be clear about unwanted behavior. That ultimately makes the owner and his dog very happy.

About the author
Dick Staal
My name is Dick Staal. Together with my son Sander I work daily with great passion and pleasure in our family business Dog Training Dick Staal.Sander's work is mainly focused on marketing, administration, customer contact and organizing seminars. This allows me to fully focus on my passion and that is training dogs, guiding people in their dog training and giving seminars.Since 1977 I have been training dogs on a daily basis. With over 40 years of experience I have developed a system in which we train our dogs positively with extremely fast results. I enjoy sharing this knowledge with other dog trainers and to see that they also achieve rapid success with our way of training.With my blogs I share this knowledge and I want to make everyone enthusiastic about our system. I hope you enjoy reading my blogs and that you can gain many valuable tips from them!
Website
Others also read these